It’s been a quiet couple of weeks on the 100k Challenge because I have been focussing most of my efforts on a new blog called Mastertronic Chronicles, which is all about my efforts to collect and play a set of Mastertronic budget games for the Commodore 64. Check it out if you’re interested!
Meanwhile I have still been working through my challenge games list and have made modest progress on a couple of them, though there have been no status changes.
The first increase came on Flying Shark, whose score had been static at 87,500 since I started the challenge. I’ve now boosted this score to 94,510 so I’m pretty close to achieving my goal on that one. The second game I’ve improved on is Hyper Sports – after numerous attempts I finally managed to complete the triple jump, though I think it was more luck than judgement! Following that I also completed the weight lifting stage only to be completely baffled by the pole vault, but I still managed to achieve a new personal best of 48,120. My fingers haven’t quite recovered yet! 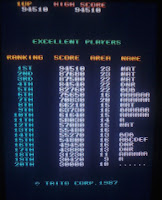 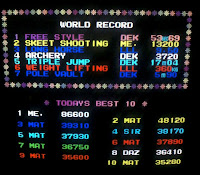 This week I have some friends coming to stay over the weekend and we’ll certainly be playing some arcade games, so the presence of some healthy competition might help me improve a few more scores. 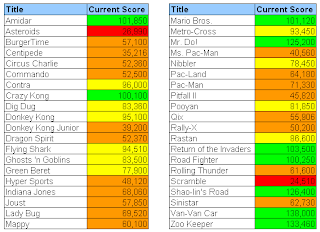 Posted by witchfinder No comments:

As mentioned last week, I’ve been working through my list alphabetically and having five credits on each game to try and increase the score. Well I managed to get as far as the letter D, and specifically Donkey Kong Jr... 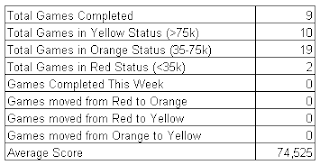 Unfortuantely I only managed to boost my score on two games, both from the Run & Gun genre as it happens. First up I managed to finally knock VULGUS off the top of the high score table on Commando, with a new score of 52,500. Then with the very next game on the list, Contra, I pushed very close to the target with a score of exactly 96,000 points. I’m not sure how I did it because progression-wise I actually didn’t get as far into the game as my last attempt that yielded around 78k, but there you go! 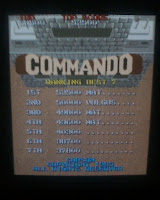 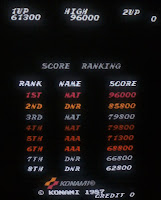 So this week I’ll continue to work through the list and hopefully boost a few more scores – maybe I’ll even break 100k on something!
Posted by witchfinder No comments:

I finally got around to pulling this off the camera, so let’s go all the way back to week 14 and check out my 100k achievement on Konami’s Road Fighter. The final moments of my attempt were a bit of a disaster but I managed it in the end...
As you’ll see, the key is not to rush through each stage and focus on getting through the traffic without bumping into it, collecting all the bonus ‘fuel cars’ that give increasing scores providing you don’t crash.
Posted by witchfinder No comments:

It’s probably not really Week 20, but 20 is a nice round number and since the last month or so has been fairly inactive, let’s call it Week 20! 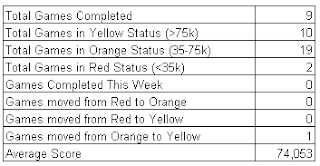 It’s fair to say progress is slowing down as my scores on a lot of games get closer to 100k. Inevitably it’s more difficult to push the scores higher beyond a certain level, so don’t expect to see a lot of difference on some scores from week to week.
That said, I have managed to push one more game into yellow status with a score of 77,900 on Green Beret. Aside from that the most significant increase was on Joust, with my new score being 57,850. 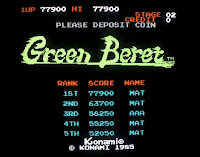 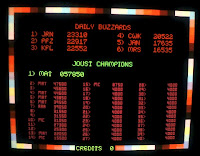 I also posted a modest increase of just over 6k on Lady Bug and an even more modest one on Asteroids, which along with Scramble continues to frustrate me as they are the only two games remaining in red status.
This week I’m taking a more structured approach by working through my list alphabetically and having five credits on each game to try and increase the score. I don’t imagine I’m going to be playing every game on the list this week, but let’s see how I get on... 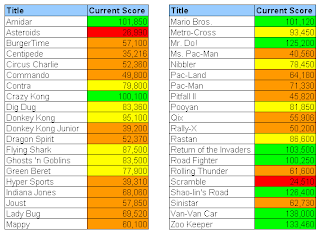 Posted by witchfinder No comments: